Venous reflux or venous insufficiency is a condition in which the valves do not function normally, which leads to reverse blood flow in the valves during sitting or standing. Reflux venous usually takes place in the lower extremities of the body, especially the legs or the ankle. This leads to swelling, pain edema, and other skin changes in the leg or affected area. Ulceration in the legs is one of the severe effects of the venous reflex. 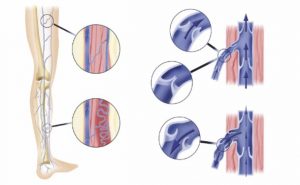 Venous insufficiency or chronic venous reflux (CVI) occurs when the valves present in the veins of the lower body do not properly regulate the flow of blood back to the heart. This can easily happen if there is any blockage or malfunction in the venous valve. This slows down the blood flow, and the pressure increases with swelling in the leg and feet. Since it would be harder to regulate the blood flow of further proximities of the body, this is why the legs and feet are mostly affected in such conditions.

Venous chronic reflux is self-perpetuating as the pooling of blood in the vein gradually leads to pulling apart the valve leaflets from each other and increases the reflux further down in the leg. When the blood pools down to the lower body, veins further swell, causing pigmentation of the skin and also the clots in the varicose veins. The blood clotting of varicose veins is known as phlebitis.

There are certain conditions that can lead to venous reflux in any individual. These conditions include genetic factors, multiple pregnancies, trauma, overweight, sedentary lifestyle, and excessive smoking habits. Patients who have a family history of varicose veins, and women over 50 have higher risks of developing venous reflux. It causes the clotting of blood inside the veins due to any disorder or trauma.

In the case of prolonged venous ulcer, the ulcer will spread to the ankles and can also become infected, making the ulcer pain and worse. 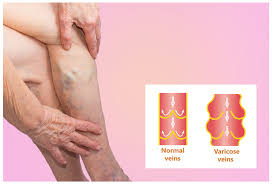 When you have the apparent symptoms of venous reflux, your doctor will either consult you to a specialist or dermatologist or will ask you to have tests for the diagnosis of CVI.  Your specialist or doctor will diagnose CVI based on the following tests.

Duplex ultrasound uses two modes for the diagnosis, Doppler and B-mode. The B-mode appears similar to a microphone, which is a transducer that captures the image of the blood vessels. The Doppler uses electrical waves to measure the velocity, elasticity, and blood flow in the vessel.

MRV uses magnetic waves, radio frequencies, and a camera in combination to get a detailed image of the organ or body part where there is venous reflux within the vessels. Magnetic resonance technology and a special intravenous dye help to make the veins appear opaque to visualize the veins easily. 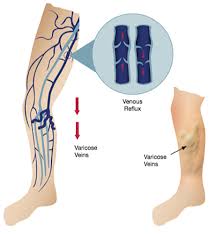 There are several treatment options for venous reflux. The treatments can be categorized into medications, surgical therapy, and sclerotherapy.

Diuretics or water pills are used to increase the amount of salt and water removed from kidneys. Diuretics help in reducing inflammation in the veins.

Anticoagulants help in thinning of the blood. This is very necessary to avoid the flowing of blood in veins with venous reflux.

Radiofrequency vein ablation is the advanced treatment for venous reflux. It is a minimally invasive procedure that uses radiofrequency to seal the veins that have undergone reflux. The radiofrequency ablation allows the doctor to remove the venous reflux with a needle puncture. This is less painful than traditional methods.

When the venous ulcer gets infected, then you need debridement for the treatment. It involves removing the infected bone marrow, tissue debris, and other residual material. This procedure further elevates the production of platelets, growth factors, anti-clotting factors, and white blood cells in the area, which promotes healing.

Certain non-surgical treatments do not require any medications for venous reflux. These include:

Compression stockings, when worn, apply even pressure to the leg, increasing circulation and preventing the backflow of blood. As a result, it also reduces the swelling. When worn daily, compression stockings can treat venous ulcers too.

Hydrocolloid dressing is a special type of breathable bandage that keeps the moisture, bacteria, and viruses away from the site of  venous reflux. The inner layer of the bandage absorbs the drainage form the wounds and helps the wound to heal.

If you or anyone you know is facing symptoms of venous reflux, then call us today at 212-249-6117 to book a consultation and get quick treatment. The Vein Treatment Center has certified, highly experienced & skilled doctors who regularly perform advanced, minimally invasive treatment for venous reflux.

← Chronic Venous Insufficiency (CVI)
Reticular Veins: What You Should Know? →